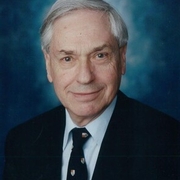 It is with sadness that INCE-USA notes the passing of Dr. Tony Embleton on November 13, 2020. Born in Hornchurch, Essex, England, October 1, 1929, he earned a PhD in physics in 1952 from Imperial College London. A one-year post-doctoral fellowship at the National Research Council in Ottawa turned into a four-decade career there. He also taught occasionally at the University of Ottawa, Carleton University, and MIT.

Tony was a former President of the Acoustical Society of America, its Standards Director, and an Associate Editor of JASA. He was awarded ASA's R. Bruce Lindsay Award, the Silver Medal in Noise, and the Gold Medal. He was a Fellow of the Royal Society of Canada, and served as its Treasurer. He was also a Foreign Associate of the US National Academies of Engineering.

Tony was active in the Institute of Noise Control Engineering and International-INCE. He will be sorely missed by his colleagues and frieds.

For more information regarding his survivors, and to make a donation in his name, please see his obituary in the Ottawa Citizen online.