Technology for a Quieter America 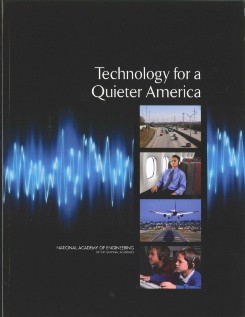 Technology for a Quieter America: The Report

The report emphasizes the importance of Noise Control Engineering to Americans' quality of life. It highlights the role of noise control technology in making a quieter environment possible.

The report includes findings and recommendations for government, industry, and public action that would mitigate or eliminate those noise sources that pose a threat to public health and welfare. Implementing the recommendations in the report would result in reduction of the noise levels to which Americans are exposed and would improve the ability of American industry to compete in world markets where increasing attention is being paid to noise emissions.

Technology for a Quieter America: Workshops

The TQA Working Group held a series of follow-on workshops from 2012 through 2019 to address specific areas of noise control.

INCE-USA is proud to host the Final Reports of the Workshops on Technology for a Quieter America.

In December, 1980, the U.S. Environmental Protection Agency (EPA) issued a federal regulation on the noise emissions of motorcycles under the authority of the Noise Control Act of 1972. Although EPA’s Office of Noise Abatement and Control (ONAC) was defunded in 1981, the regulation is still part of the Code of Federal Regulations (40 CFR 205). After 32 years of experience with the regulation, there is general agreement that it has not accomplished its intended goal of reducing motorcycle noise emissions.

While the regulation has served to insure that all motorcycles entering commerce from major original equipment manufacturers (OEM) are in compliance with the regulation, as written, there are unintended consequences once the product enters service, including modifications that negate the noise control elements installed by the OEM. These regulatory deficiencies would benefit from clarifications and revisions. Motorcycle design has changed, the test procedure has proven difficult to implement, state and local government enforcement is rare, and there is widespread use of motorcycle exhaust systems that are not compliant with the regulation. Excessive motorcycle sound has become the single greatest threat to American motorcycling’s future. It’s among the most controversial and potentially divisive issues in motorcycling.

This report is a summary of a roundtable sponsored by the INCE Foundation and the Noise Control Foundation that was hosted by the National Academiesof Engineering on October 24, 2012. This report includes recommendations for revisions to 40 CFR 205 that will increase benefits to the public, and assist state, and local authorities as well as manufacturers of motorcycles and aftermarket exhaust systems in assuring compliance with the regulation. Participants at the roundtable included motorcycle manufacturers and exhaust system manufacturers, trade associations, a standards organization, federal, state, and local government agencies, noise control engineers, and the public.

At highway speeds, the major source of noise is the interaction between tires and the road surface. Highway noise barriers have been used for many years and are the preferred solution for reducing highway traffic noise. Federal Highway Administration regulations for highway traffic and construction noise abatement (23 CFR 772) currently consider only noise barriers as an abatement measure for highway noise. Through the end of 2010, the Departments of Transportation of 47 US States and the Commonwealth of Puerto Rico have constructed more than 2,748 linear miles of highway noise barriers at a cost of close to USD$5.5 Billion (in 2010 dollars).

However, pavement type can considerably reduce the noise generated from tire-road interaction. Yet considering pavement as a noise abatement measure is currently only allowed for pilot projects approved by the Federal Highway Administration.

Treatment of highway pavement is generally less costly than the construction of barriers, but the noise reduction achieved by a quieter pavement is typically less than the reduction from a well-designed barrier, at least for residents in the immediate vicinity of the barrier. However, quieter pavements produce a reduction of noise at its source, which means that it may be possible to increase the number of benefited receptors (the recipient of an abatement measure that receives a noise reduction at or above the highway agency’s chosen noise impact threshold value). A combination of barrier and pavement treatment may lead to cost-effective solutions to highway noise.

To evaluate the effectiveness of quieter pavements, a reliable measurement method for tire/road noise is needed. The method that is currently favored is measuring On-Board Sound Intensity (OBSI). OBSI data are collected in conformance with AASHTO TP-76,3 the American Association of State Highway and Transportation Officials Standard Method of Test for Measurement of Tire/Pavement Noise Using the On-Board Sound Intensity (OBSI) Method.

Reducing Employee Noise Exposure in Manufacturing: Best Practices, Innovative Techniques, and the Workplace of the Future

This Technology for a Quieter America (TQA) final report summarizes the follow-up workshop hosted by the National Academies of Engineering (NAE).

This Technology for a Quieter America (TQA) final report summarizes the follow-up workshop on the progress made by noise control engineers in recent decades—specifically, in noise reductions of consumer products inside and outside the home, and industrial products for international and domestic markets. Projections are included on further noise technologies anticipated in the future.

The first group of the 25 workshop presentations summarizes engineering noise control progress during recent decades for consumer products such as appliances, yard-care equipment, and automobiles. The second group of presentations summarizes noise control efforts on a wide range of commercial and industrial products including gen sets, motors, compressors, electric transformers, valves, gears, off-road mobile machines, mining equipment, and natural gas pipelines, as well as military equipment and noise standards. The report includes a summary of findings based on the workshop presentations.

The workshop focused on issues related to the transfer of technology related to noise control. It looked at current noise control research conducted by the government, academia, and the private sector and considered what holds promise for translation into innovative noise control solutions. Presentations examined noise control approaches at various levels of technology readiness, and their potential for transfer and ultimately for improving the ability of engineers to solve problems and improve the competitiveness of U.S. industry.

This Technology for a Quieter America (TQA) final report summarizes the follow-on workshop "Commercial Aviation: A New Era", hosted by the National Academies of Engineering (NAE) in Washington, DC on May 8–9, 2017. The workshop was organized by the INCE Foundation in cooperation with the National Aeronautics and Space Administration (NASA) and the Federal Aviation Administration (FAA).

A principal focus of the workshop and this report is the necessary step-changes in aircraft engineering technology that must now be addressed with the development and testing of flight demonstrators together with significantly increased funding of public-private partnerships. These changes are necessary for the U.S. aviation industry to maintain its global leadership and positive trade balance. Aviation technology investments in Europe and China are now significantly exceeding those in the U.S.

NOTE that this document is very detailed. For a brief overview, please refer to "Commercial Aviation: A New Era", also published by the NAE TQA program.

This Technology for a Quieter America (TQA) final report summarizes the workshop, "UAS and UAV (Drone) Noise Emissions and Noise Control Engineering Technology", hosted by the National Academies of Engineering (NAE) in Washington, DC, on Dec. 13-14, 2018. The workshop was organized by the INCE Foundation in cooperation with the National Aeronautics and Space Administration (NASA) and the Federal Aviation Administration (FAA).

Session topics at the Workshop included:

This Technology for a Quieter America (TQA) report summarizes a special session on noise control engineering education, held on August 27 during the NOISE-CON 2019 conference in San Diego. The session, held in association with the National Academy of Engineering, came 12 years after another TQA workshop on the same topic, which was the partial basis for the 2010 TQA Report 1 Chapter 9, “Education Supply and Industry Demand for Noise Control Specialists.”