Winner of the INCE Members’ Choice Project of the Year Award!

A problem arose at a recently completed high-rise condominium building in Philadelphia, PA. Tenants on many levels above a pool located on the second level of the building stressed that they could hear low-frequency sound when an early-morning swimmer was doing laps. Looking through literature, we found nothing to attest to the phenomenon that presented itself. To investigate, we used a 15 lb. rubber medicine ball to simulate the force caused by the swimmer, which also provided a repeatable source. Cavitation in the water created by the arm strokes of the swimmer was exciting the pool shell and transmitting through the structure ultimately converting to audible sound via the lightweight partitions in the living units. Our measurement system included time synchronized triaxial accelerometers to determine the transmission paths through the building. We identified this unique problem, determined the structural transmission paths, and provided recommendations which ultimately resulted in a successful outcome.

The pool is above grade on the 2nd floor. Lobby space is located below and living units are above. The remaining areas of the 2nd floor include other amenities as shown in the following floor plans. Shortly after the building was occupied, a resident on the 3rd floor directly above the pool started complaining about low frequency thumps when an early morning swimmer was doing laps. The building didn’t correlate the sound to the pool for several weeks, and structure-borne sound could be heard up to the 18th floor during swimming sessions. 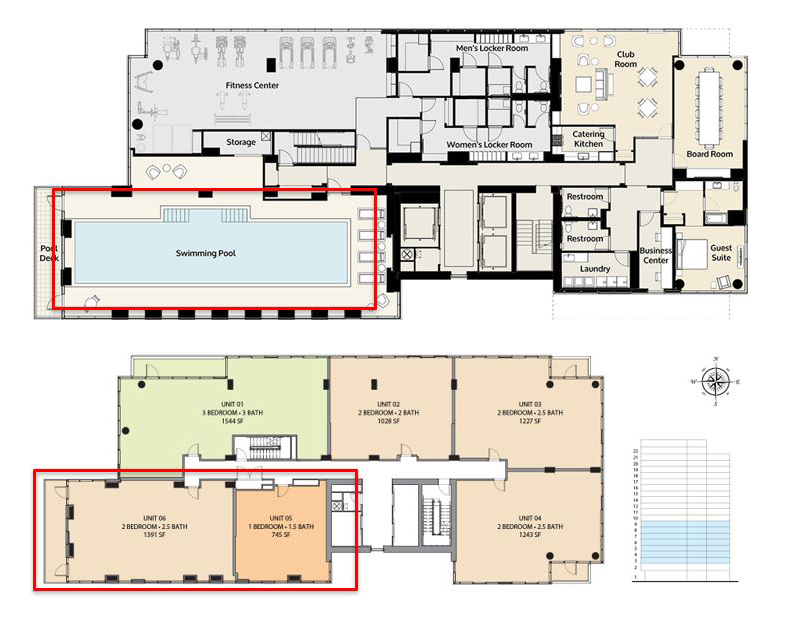 The pool is designed to have a water containment area around pool shell. There are hatches in the pool deck to access areas around the long sides of the pool. The shell consists of 8” Gunite (sprayed concrete) on rigid insulation. There is a structural concrete slab below the insulation and 6” thick concrete knee walls on the sides. The following images show the pool shell design. The section is cut laterally through the pool and shows the water containment area that is located on both long ends of the pool.

We first needed to find a repeatable sound source; we tried a 30 lb dumbbell, a person kicking and splashing, and a 15 lb medicine ball. The medicine ball turned out to be very consistent and repeatable. We then used the triaxial accelerometers to measure vibration transmission through the building on the following surfaces: pool deck, concrete knee walls, structural slab under the pool, on the columns around the pool, and in 3rd to 5th floor residential units. We were able to cut away the gypsum board around the columns to measure directly on the columns themselves. There was another upper level pool in a high-rise condominium building in Philadelphia that was also located directly under residential units that was not causing any problems. We used this pool as our control pool and conducted similar testing. The difference with this pool was that there is no water containment system and it sat directly in a concrete basin with no rigid insulation.

The following images show the vibration measurement results at the problem pool and control pool. 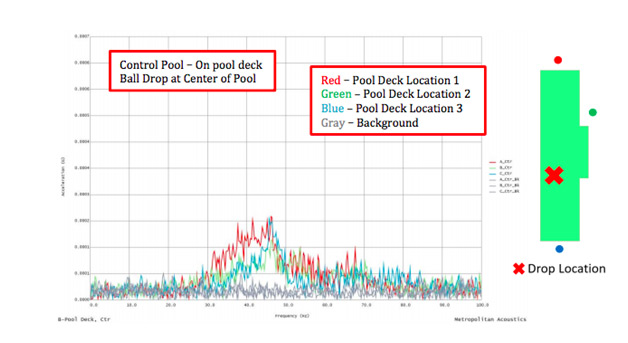 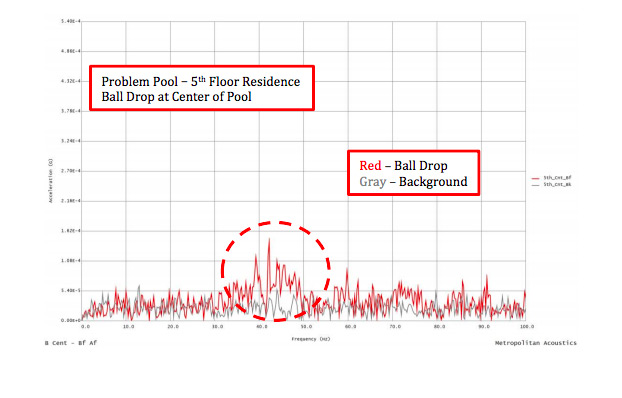 The Analysis and Conclusions

We determined that the pool shell was acting as a cantilever on the two west columns. When a heavy swimmer was doing laps, the pool shell moved slightly in its rigid insulation bed, and sound carried vertically very easily up the columns to the floors above. The image on the left shows the two columns that were transmitting the vibration. The floor plan shows how these columns are directly supporting the short end of the pool. The columns are shown in pink, the pool in green, and the water containment area in blue. As seen, the remaining columns are all outside of the water containment area.

We decided that the best course of action was twofold. The first was to brace the pool to reduce the movement when excited, and the second is to dissipate the vibration of the water getting to the pool shell. The following picture shows the bracing of the pool to the knee walls and structural slab through the rigid insulation.

To reduce the transmission of shock waves to the shell, we used a separate inner pool skin that was floated on Mason Industries isolators on channels with Getzner Sylomer and Sylodamp between the isolators. This covered every surface of the pool including the steps. The following images show the design. 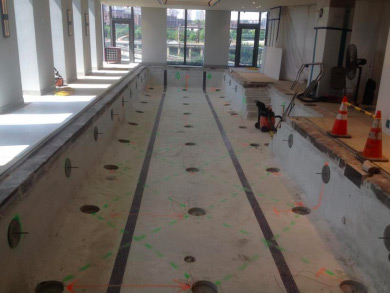 We successfully reduced the structural transmission of sound to the residential units as shown in the following graphs. No complaints from the residences have been brought up since the remedial measures were implemented. It was quite a learning experience as there is very little in literature about this problem. We have seen some manufacturers recommend floating a pool, but examples of this application in the real world are few and far between. Since there are more high-rise buildings being built with pools, this issue will be coming up more often. We concluded, based on our measurements at both the problem pool and control pool, that structurally bracing a pool to a concrete bed is a good way to minimize structural transmission of sound in combination with a resilient inner pool shell. 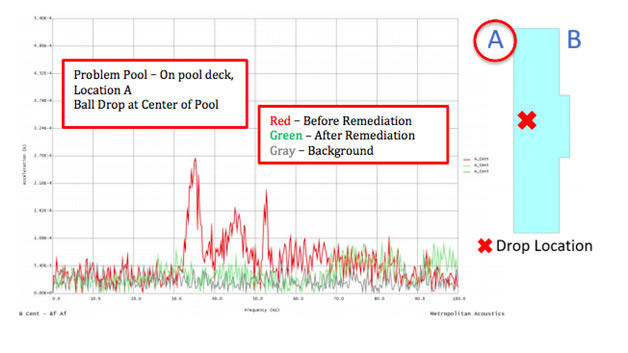 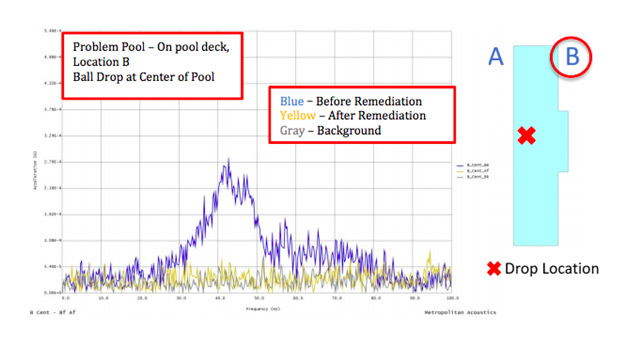 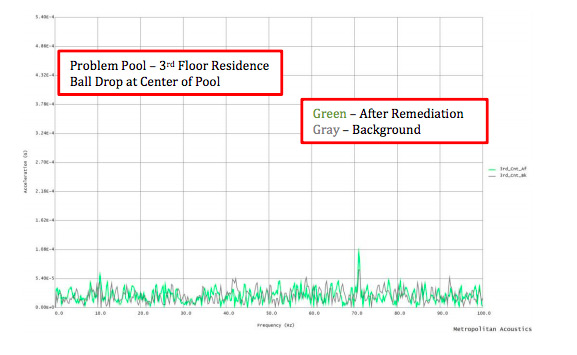