Taunton Municipal Light Plant (TMLP) is a public utility service provider in Taunton, MA. In 2019, TMLP installed four new 2.5-megawatt generators as part of a global adjustment initiative. The generators were installed such that the plant can switch to standby power during peak consumption times, reducing energy usage from the grid and associated costs. As the generators would operate over longer periods, they were required to comply with MassDEP Noise Policy for stationary noise sources. Post installation, the originally supplied enclosures failed to meet the acoustic performance requirements for the site. To work within site and system constraints, an at-source attenuation strategy was formulated using a vibro-elastic wall mount system that was applied to the exterior façade of the generator enclosure. Through close design collaboration between the acoustic consultant and the noise solution provider, the final retrofit solution was successful in bringing the facility into regulatory compliance.

Upon commissioning, the new peak shaving generator units were found to exceed Massachusetts state noise policy, creating an unexpected liability for the Taunton plant's managers. The noise limit per regulations stipulates that a noise source is considered to be violating if the stationary source: - increases the broadband sound level by more than 10 dBA above ambient or - produces a “pure tone” condition – when any octave band center frequency sound pressure level exceeds the two adjacent center frequency sound pressure levels by 3 decibels or more. Given the location of the generator enclosure’s proximity to residential receptors to the east and considering the ambient noise levels, it was determined that the sound pressure level shall not exceed 62 dBA at 50 ft from the generator (No – 4) closest to the residential receptor. Prior to further mitigation, the measured sound level from the eastern most generator enclosure was 68.3 dBA at 50 ft. To comply with MassDEP limits, additional acoustic treatment was required to the previously attenuated generators. We became familiarized with the project after an acoustic consultant (engaged by the generator supplier) had conducted thorough onsite analysis of localized noise emitting from various points of each generator.

We began direct collaboration with the acoustic consultant and the generator supplier to engineer a cost effective and practical approach to solving the noise problem.

Figure 2: Aerial view of the site.

Through the detailed analytical efforts of the acoustic consultant, it was determined that the acoustic deficiencies were primarily caused by insufficient transmission loss in the enclosure’s casing. This was a result of both inadequate mass to attenuate lower frequencies, and inadequate absorption to limit the reverberant sound levels within the generator enclosure. The vibration within the enclosure transmitted through the wall panels, thereby de-rating the transmission loss performance of the existing enclosure. Furthermore, the steel structure supporting the generator enclosure allowed for the noise from within to be transmitted to the exterior perimeter.

The site is located next to the Taunton river as shown in Figure 2. Proximity to the river limited the type of mitigation that was feasible. For instance, an absorptive barrier wall high was initially conceptualized to reduce receptor levels into compliance. Though effective, the wall height required to shield the noise from the four generators was in excess of 20 feet. An extraordinarily high-water table (i.e. poor foundation conditions) coupled with a congested site layout precluded this as a viable mitigation strategy.

Based on the acoustic assessment, it was evident that the most practical and elegant way to address this problem would be to mitigate the noise at source. The mitigation required additional levels of transmission loss and acoustic absorption to the deficient areas of the enclosure, while correcting levels of vibratory excitation in the wall panels that were exacerbating the transmission loss deficiency. Prior to brainstorming solutions, we wanted to better understand the problem at hand. As such, we conducted analytical and computational assessments to mimic the derated performance of the existing enclosure. Consequently, an additional assessment was conducted to determine which combination of secondary panels (when adhered to the existing enclosure) would provide adequate attenuation and vibration isolation. Panel design was completed using a combination of computer aided modelling, empirical calculation, and reference to legacy free field performance data from previous applications. Once the final panel make-up and resilient mount was selected, the area in which it was applied was iteratively modelled by the acoustic consultant until the mitigation strategy was optimized. This meant attenuating the smallest area possible on the four enclosures to yield a final sound pressure level of 62 dBA at the 50 ft from the enclosure.

Once the solution was identified, it was critical to develop a strategy to implement it. Attaching the secondary panel to the existing enclosure required precise as-built dimensions of the enclosure (see Figure 3). This included confidence in its features such as, structural supports, door openings, allowance for access ladders and other possible interferences affixed to the unit. It would be extremely difficult to have conducted traditional site dimensioning to the precision required for the proposed solution. In addition to site dimensioning, the project’s timeline was another major obstacle. Fast approaching inclement winter weather dictated that the solution be determined and implemented within six weeks from the initial design phase of the project. This meant deploying prefabricated modular construction methodologies to reduce installation time. Typically, this style wall panel would be inlaid between hot dip galvanized custom-made structural support frame. Given the limited timeline this was not a viable option requiring a different fabrication methodology. Besides, shorter installation time meant adequate time for detailed designing demanded by the current strategy and less risk exposure resulting from onsite assembly and fabrication. 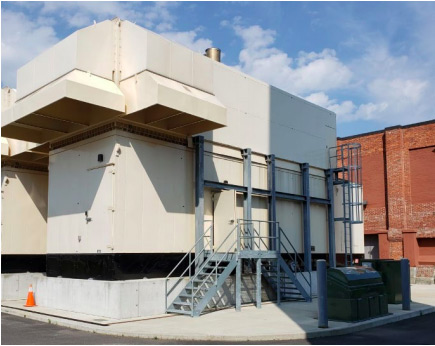 Figure 3: Site picture of the fourth generator enclosure with structual supports from the south east direction.

To overcome site dimensioning issues we utilized 3D scanning technology in the field. Instead of attempting to manually capture all details of this large system, we engaged a firm to utilize long-range laser scanning in order to generate a detailed point cloud model of the entire generator. All detailed design was completed by our in-house engineers and CAD technicians, using this complex 3D-point cloud model (see Figure 4 and 5). 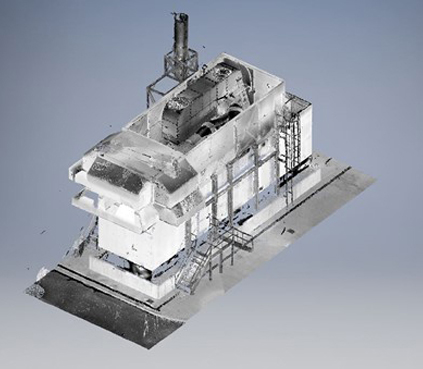 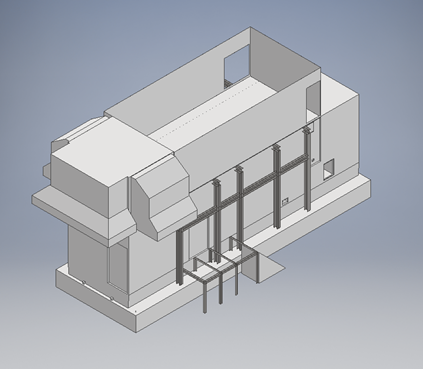 Figure 5: Regenerate base model built off the point cloud model.

The final solution agreed to with the partnering acoustical consultant was to install the vibration isolated secondary acoustic panel on the east and south façade of the generator No.4 to the east. The resultant panel was a combination of absorption and transmission loss layers bonded with a constrained layer adhesive, mounted to a modular steel stud wall that would align in front of the existing enclosure. The steel stud wall, (shown in Figure 6) was then connected to the existing enclosure using a grid of neoprene wall mounts. The secondary acoustic panel laid into the decoupled stud wall was then finished with an architectural cladding (see Figure 7) system to resemble the existing generator enclosure for aesthetics. An acoustic vestibule (see Figure 8) was installed over the main entry door to mitigate breakout noise through the door seals in order to avoid disruption to any of the system disconnects and other functional componentry.

All stud channel members were cut, notched, dimpled, and labelled from a pre-galvanized steel roll to provide rapid on-site assembly. By moving to this lightweight steel stud system, we were able to eliminate a considerable amount of material cost from the design. It also eliminated the need for other structural steel, hot dip galvanizing and on-site field welding during construction. Though simple, it was an elegant solution that enabled a quick fabrication turnaround. 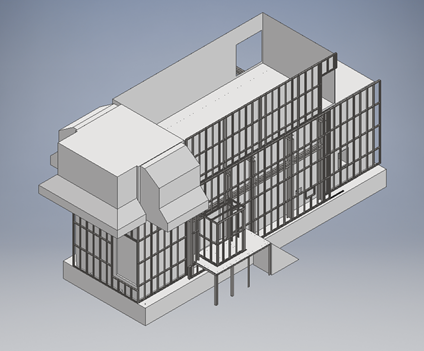 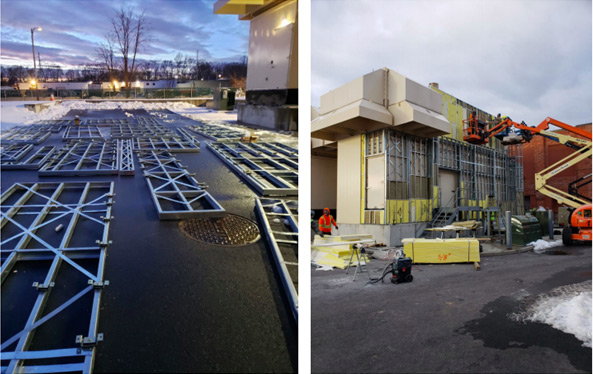 Through extensive collaboration with the acoustic consultant, we succeeded in reducing the generator noise emissions to within the limits of local ordinances. The noise at 50 ft from the generator enclosure was measured at 60.8 dBA overall, (see Figure 9) which fell below the 62 dBA stipulated by the local ordinances. Most importantly, the implementation was completed in 10 consecutive days, with no impact to the plant’s operations. The overall outcome was a cost-effective, novel approach to reducing a seemingly daunting noise abatement project to a simple, elegant solution. The highlight of the project however was exemplifying the pronounced efficacy that can result when there is a collaborative relationship between noise control supplier and acoustic consultant. In the case of the TMLP project, this hand-in-hand design process reduced both project costs and timelines to 25% of what would have otherwise resulted using traditional mitigation methods. 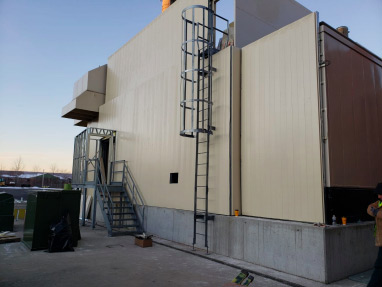 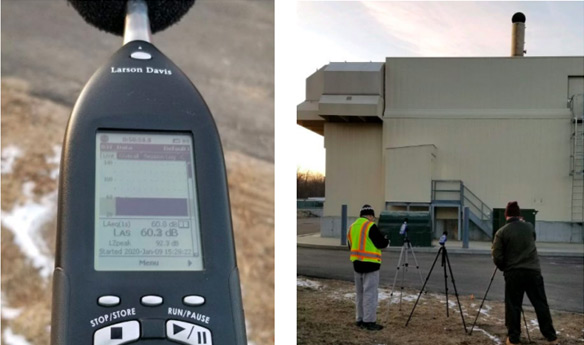